RECORD/REWIND In-Conversation Event: 2 February 2012, 3 - 4.30pm
To book for this event go to: http://recordrewindinconversation.eventbrite.co.uk/
To accompany this exhibition of an extraordinary selection of video works from Germany, an In-conversation event will take place at the Visual Research Centre of DJCAD; the home of the REWIND research project. Featuring researchers, curators and artists from Germany and Britain, this discursive event provides a unique opportunity to scrutinise the histories of the video art movement in both countries and to unpack the propositions, approaches and outcomes of these two prestigious historic European research projects.
Speakers include Malcolm Dickson, Holger Mohaupt, Dorcas Müller and Stephen Partridge, chaired by Deirdre MacKenna. (see biogs below)
* We would like to thank Goethe-Institut Glasgow for supporting us to invite the keynote speaker Dorcas Müller to contribute to this event.
The Preview of the exhibition follows the In-Conversation event and takes place between 6 – 8pm on the 2 February. The exhibition continues 3 February – 4 March 2012, Mon – Sun 12 – 4.30pm. There will also be a REWIND Screening Event on 15 February, 5.30 – 7.30pm.
RECORD>AGAIN! 40yearsvideoart.de - Part 2 is the second phase of a remarkable project40jahrevideokunst.de, initiated by the German Federal Cultural Foundation in 2006. Under the direction of ZKM Karlsruhe (Centre for Art & Media Technology), five leading German museums have worked in collaboration for the realisation of the project, which aims to preserve, restore and disseminate one of the most influential art forms of the 20th century; Video Art.
Including many works that have not been seen for decades, the exhibition features over 40 outstanding video pieces made between 1968 and 2008. Highlights include a rare work by Ulrike Rosenbach with her partner at the time, Klaus vom Bruch, the boxing match from 1972 that Joseph Beuys participated in at the documenta 5, and the first video synthesizer collages by Walter Schröder-Limmer.
The exhibition focuses exclusively on the medium of video and the core mission of the project, which is preservation, not canonisation. Many works from the history of video were considered untraceable, lost or no longer playable. The project’s main concern is to save these works from deteriorating while at the same time reconstructing the history of the video movement as a whole.
The REWIND: Artists’ Video in the 70s & 80s research project at Duncan of Jordanstone College of Art & Design provides a meaningful context for this exhibition to be shown at Centrespace at Visual Research Centre, DJCAD. The REWIND project through its focus on video works of the 1970s and 1980s provides a resource to address the gap in historical knowledge of the evolution of electronic media arts in the UK. Funded by the Arts and Humanities Research Council (AHRC) it has investigated, conserved and archived over 450 single screen and installation works from the first two decades of artists’ works in video. Building upon the success of REWIND UK, a new funding support from the AHRC enables the project team to embark on REWINDItalia; a 28-month project that explores the important history and narratives of video art activity in Italy between 1968 and 1994.
* The exhibition and In-conversation event are presented in association with Goethe-Institut Glasgow

Biographies of the speakers for the RECORD/REWIND In-conversation Event:
Malcolm Dickson is a curator, writer, organiser and Director of Street Level Photoworks in Glasgow. He has curated numerous projects including Lost and Found: video installations from the 70s and 80s (2010);Timeloop – Video Art from Germany (2007) and conferences about video and media art. He initiated the New Visions International Festival of Film, Video & Media and helped establish New Media Scotland. As an artist, he has exhibited at the Third Eye Centre, the Smith Biennale, Audio-Visueel Experimenteel, Arnhem and has played a key role in artist-driven initiatives Transmission, EventSpace and Variant magazine. He is an Honourary Senior Research Fellow at Dundee University.
Deirdre MacKenna has over twenty years’ experience programming contemporary visual art in Scotland and has been Director of Stills in Edinburgh since 2002. She is a jury member of The Margaret Tait Award, an Honorary Research Fellow of the University of Dundee Rewind Italia project and runs her own cultural production programme Cultural Documents in Scotland and Italy.
Holger Mohaupt is an artist and filmmaker. He graduated from the Art Academy in Hamburg, Germany and moved to Scotland in 1995 to do a postgraduate diploma in Electronic Imaging at Duncan of Jordanstone College of Art & Design. In 2008 he finished a practice-led PhD at the University of Dundee, where he is a visiting lecturer in the department of Time Based Art.His current research is informed by locative media and social networking. He lives in North Berwick on the east coast of Scotland.
Dorcas Müller studied media art at the University of Design Karlsruhe with Professor Ulay (Uwe Laysiepen). She has received recognition for her artwork through stipends from the Kunstfonds Bonn and the Körber Foundation, Germany among others. As research associate at the ZKM | Center for Art and Media Karlsruhe since 2004, she participated in numerous productions as video editor, video restorer and author (Thinking in Loop, Boris Groys, Hatje Cantz, 2008; RECORD>AGAIN!, 40yearsvideoart.de – Part 2, Hatje Cantz, 2010).
Stephen Partridge is an artist and academic researcher. He is the principal investigator on the research project REWIND funded by the Arts & Humanities Research Council (AHRC). He exhibited in landmark video shows including Video Show, Serpentine (1975), Installation Show, Tate (1976) and The Kitchen, New York (1979). During the eighties he became interested in works for broadcast television and was commissioned by Channel 4. With Jane Rigby, he produced the innovative Television Interventions project, Channel 4 (1990). He has also curated a number of influential video shows and touring tape packages:Video Art 78 in Coventry; UK TV New York; National Review of Live Art 1988-90; 19:4:90 Television Interventions; Made in Scotland I,II, Semblances, Passages.  Other major collaborations include installations and prints with the artist Elaine Shemilt. He established the School of Television & Imaging at Duncan of Jordanstone College of Art & Design (University of Dundee) and is presently Professor of Media Art and Dean of Research.
Centrespace, Visual Research Centre is part of Duncan of Jordanstone College of Art & Design and is located on the lower floors of Dundee Contemporary Arts, 152 Nethergate, Dundee.
Posted by Cooper Gallery, DJCAD at 03:31 0 comments 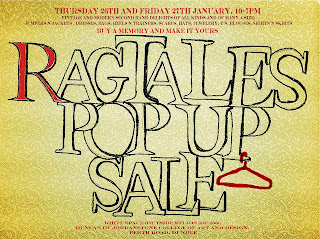 MFA student, Rowan Richardson, is currently interested in the possibilities that come from an artist’s engagement with the public.  Her current project, RAGTALES, is to begin with a fundraising event this Thursday and Friday- selling second hand clothes, shoes and costume jewellery- where she asks RAGTALES shoppers to "Buy a memory and make it yours." Some customer purchases will contain a link to a blogged memory of that item and all customers are invited to contribute to the blog when their purchase becomes a part of their own memories.
Join the event on Facebook where you can confirm your attendance and view taster photographs of the items on sale.
Posted by rowanbeth at 10:56 0 comments