Throughout July, Glasgow-based artist Anne-Marie Copestake is Artist in Residence. Copestake is an artist who works with moving images, sound, performance, text, print, and sculpture. Fundamental to her practice is the exploration of language, in the form of printed artworks, texts, explorations of construction through lyric forms and scripts. Copestake often works collaboratively and has been a founding member of two long-term collective projects in Glasgow: Poster Club and Muscles of Joy.

Here Copestake reflects on the development of her works and her collaborations with local artists and experimental musicians while staying in Zhujiajiao Town... 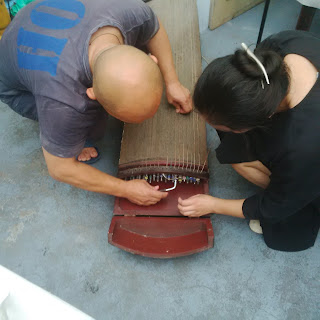 Strings Awu and Huang Jun replace strings and tune up the Guzheng. The tuning was explained to me in this way - Do, Re, Mi, So, La are present, and Fa and Ti are missing. But it has mostly been played during our sessions in untraditional ways, with various bows, keys, strips of cardboard, and sticks. 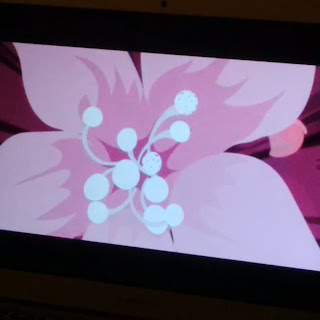 Jia Zhangke
I've been finding out more about the work of Jia Zhangke, from short clips and from talking to people. We watched a few of his films, 'Still Life', and 'The World'.

Trying sounds
A local bar have kindly offered for me to come and use their drums whenever I like, during their opening hours from 10am to 10pm. I asked if it wouldn't disturb their customers, as it is peak tourist season, but they responded by saying I could go every day if I liked. I cannot imagine that someone warming up on drums would be much fun while you're trying to have lunch, so I first went along during the typhoon thinking it would be empty, and attempted to play as softly as possible to not disturb the CD that was playing. The only others in that day were a woman dozing in a chair, who occasionally gave me big smiles, and a wee boy playing next to her. 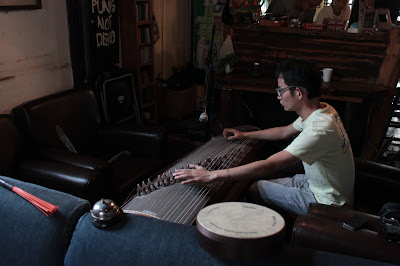 ‪In the next few sessions Huang Jun and his friends brought other instruments along, the CD's were switched off, and a shifting line up of friends from the town have appeared to play and try out various combinations of sounds. 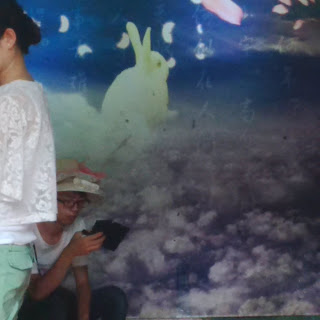 Dress up shop
There are several dress-up shops in Zhujiajiao Town. There are rails of costumes, props, hair and make-up, a back-drop, and then more props are positioned at choice views in the street. You choose a classic look from the range of looks available,  and the preparations are then made for your transformation and final photograph. 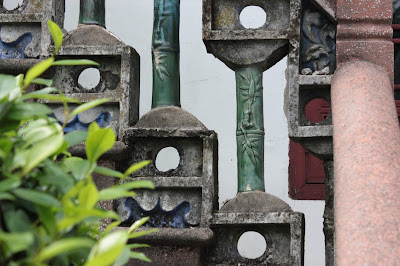 Bamboo ceramic Balusters
Zhujiajiao has a number of large gardens for visitors to see, gardens laid out according to particular Chinese landscaped styles. The photograph details ceramic bamboo parts on a staircase on a small pavilion in one garden. At the top of the stairs was a decorated room with wax figures, representing an original resident of the house and garden having tea with his friends.

Immersed in the historical, social and cultural context of China, the residencies enable the artists and writer to interact with contemporary art communities in the region. This unique experience will open up new positions, ideas and creative approaches for the artists and the writer, which will be shared with artists, writers and audiences in Scotland through a special programme at Cooper Gallery on their return.

From 28 June – 5 July, Poster Club members Ciara Phillips, Michael Stumpf, Nicolas Party and Anne-Marie Copestake will undertake a week-long residency to recalibrate the group’s ideals “to make posters and to collaborate”, throughout July Glasgow-based artist Anne-Marie Copestake will be in residence and developing her work with local musicians in Shanghai, then from 15 – 31 July, art writer and member of Cooper Gallery’s Group Critical Writing initiative, Frances Davis will be the Art Writer in Residence, reflecting and annotating upon CURRENT |不合时宜 in Shanghai.

Find out more about the Phase One CURRENT Artists & Writers Residencies programme on our website.

CURRENT|不合时宜: Contemporary Art From Scotland is open at Shanghai Himalayas Museum until 9 August 2015. For more information visit our website.

Posted by ExhibitionDJCAD at 06:43 1 comments

For the 2015 edition of Cooper Summer Residency, we are delighted to host Glasgow-based artist Oliver Braid and Lyon-based artist Anouchka Oler, as well as Edinburgh-based philosopher, Joseph Fletcher. The artists’ practices investigate Object-Oriented Ontology and each will consider this philosophical phenomenon through the theme of thingness? during the residency. A Cooper Summer Salon will be held once a week during the residency to amplify the making and thinking through conversations with the audience.


Posted by ExhibitionDJCAD at 09:15 0 comments