The gallery space of Georgina Starr's Before Le Cerveau Affamé is a theatrical playground, filled with pastel hues, lighting and heavy curtains. The works on show offer an exploration of femininity that permeates through the generations, free from the male gaze, creating a 'No Boys Allowed Club' atmosphere that recalls the sexual rebellion of flappers and The Spice Girls (which I mean as a sincere compliment.) If one were to enter with a cynical head on, they might see the world of Le Cerveau as a bit fluffy – a place where little girls can run around chewing bubblegum and doing cartwheels in their Sunday dress, however there is more serious side to it.

Pink brains sit on literal pedestals like specimens in a morgue. The tarot cards create their own esoteric symbolism, a small glimpse into an arcane religion. Shrieks emit from the headphones in the corner.

For me, the video work is key to the show, bringing everything together and making every other piece seem a few shades darker after viewing. It shows the questioning of 'what will I be when I grow up?' and the wide-eyed wonder of youth being eroded by domesticity:

(She was a free flowing spirit//
What are you gonna do about the baby?//
A washing machine//
Overwhelming sadness//
Is this a picture of your mother?//
You know when you're going to die)

The repeated sound clip of 'what are you gonna do about the baby' suddenly makes the tarot card of The Mothers seem rather poignant. Afterwards, the mirror on the wall becomes a vessel for introspection. How do you see yourself and are you a picture of your mother?

For more information and images please see:
http://www.dundee.ac.uk/djcad/exhibitions/exhibitions/georgina-starr-before-le-cerveau-affame/
Posted by ExhibitionDJCAD at 08:57 0 comments

Exhibitions at DJCAD were pleased to meet with the new team members of the Student Curatorial Team this week at an Introductory Meeting to begin to think about what projects, exhibitions and events this year's team might develop.

Sophia Hao highlighted two key exhibitions, which can be seen to exemplify Cooper Gallery's curatorial model, namely A CUT A SCRATCH A SCORE, a process-led events based project led by Bruce McLean, Sam Belinfante and David Barnett who collaborated together with singers, dancers, drummers, choirs and the city at large, most of which took place during a week in 2011. This project also had a writers in residency strand entitled An Action of Words.
Another exhibition Sophia discussed was Edgar Schmitz' Surplus Cameo Decor, 2012 and the satellite project Hubs and Fictions: A Touring Forum on Current Art and Imported Remoteness, which brought together contributors from the fields of artistic, curatorial and cinematic practice for a forum that toured across three UK venues.

Andrew Dodds, Technical Manager of Exhibitions and VRC spoke briefly about two workshops he will run workshops early in 2014 about exhibition project planning and artwork handling and care. Later in the year other events and workshops will be arranged, including special talks from visiting curators and a workshop to encourage interdisciplinary approaches and sharing/exchanging of ideas across the team.
Later in the meeting we discussed previous Student Curatorial Team projects and looked at marketing materials and exhibition information that has been designed by previous team members. Through this we started to discuss the logistical or practical aspects of exhibition making. We also began to hear from the SCT about the types of projects they would be interested in developing. This was a great opportunity to hear the types of creative approaches to exhibition making that the team might develop together this year, we're looking forward to hearing how these ideas develop.

Lada Wilson, current MFA student and member of the SCT is currently curating interAction(s) draw-ing words which is situated in the Matthew Cabinet. Lada is encouraging collaborative consideration of the types of language often used to describe art exhibitions, the work in the cabinet changes on a daily basis as the artists continue to respond to one another. 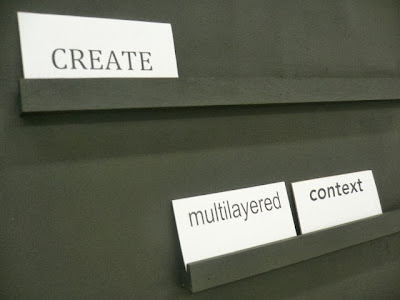 See below for the 4 star review by Moira Jeffrey, which was printed in The Scotsman
Also available here. 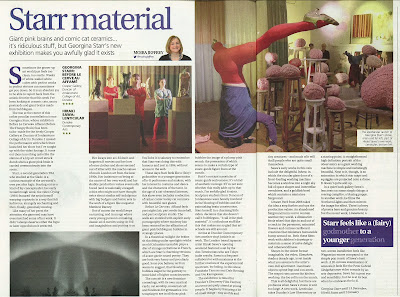 Posted by ExhibitionDJCAD at 07:50 0 comments