Not so long ago... Kieran Milne shares his reflections on the recent 'Someone a long time ago, now.' Hugo Canoilas exhibition in Cooper Gallery.

Someone a long time ago, now. is the first major solo show in Scotland by Portuguese artist Hugo Canoilas.

The show opens with a series of painted sheets hanging in the half lit entrance of Cooper Gallery Project Space. The sheets are lit by a series of overhead projectors shining a variety of images onto the textured and colourful surfaces, most notably a car crash.

Hanging in front of the projection of the car crash is a suspended object, a shoe hanging from a metal pipe, hanging from the ceiling and it is this object that sets the tone of the show. The shoe, in the context of the car crash is that universal signifier of the human element of an accident. An accident of birth and of existence and it is this existential nature, which pervades the rest of the show.


Upstairs is a riotous offering of wall paintings. A comic book, I Like Your Art Much, hangs suspended above a small stool and on reading reveals itself to be a dialogue between the writer of the comic, Francisco Sousa Lobo, and the work of Canoilas. There is a playful familiarity in the comic, and the unreserved analysis of Canoilas' practice and themes acts as a visual reader for the work on display. The comic was produced especially for the show and references most of the works within its pages.


Finally in the main Cooper Gallery space there hang five large canvasses stapled to the wall, these are raw in their material nature and consist of extinct creatures spouting existential musings. They bring to mind 70s textbook illustrations and further the tension between the mortality of the viewer and the fate of these extinct creatures causing one to question our own time and place.

Hugo Canoilas spoke with Art in Scotland TV ahead of the exhibition Preview. See him discuss his practice here:

For more information about the exhibition please see the website: http://www.dundee.ac.uk/djcad/exhibitions/exhibitions/hugo-canoilas/
Posted by ExhibitionDJCAD at 03:18 0 comments

New Cooper Gallery Publication 'I Like Your Art Much'/// From: Francisco Sousa Lobo To: Hugo Canoilas

Set out to be an exhibition within an exhibition, Francisco Sousa Lobo's comic book I Like Your Art Much acts as a reflexive voice and a point of departure from which Hugo Canoilas' entire exhibition Someone a long time ago, now. evolves, mirroring the artist’s critical stance on the social and political histories of the contemporary. 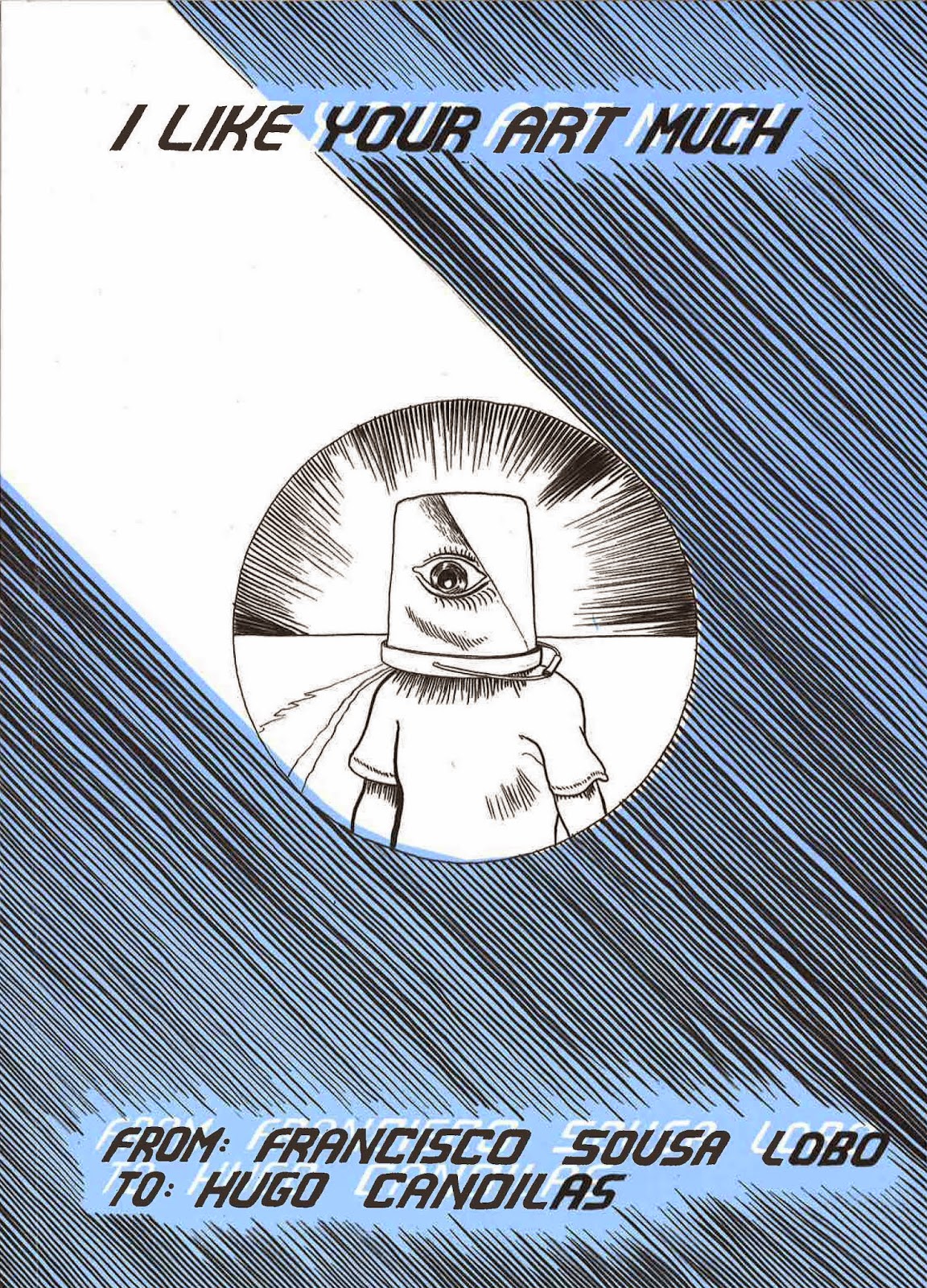 Published on the occasion of Hugo Canoilas' exhibition Someone a long time ago, now., Cooper Gallery, March - April 2015. Someone a long time ago, now. is the first major solo exhibition of Portuguese artist Hugo Canoilas in Scotland and is a rich palette of visual and textual collisions between multiple collaged projections of paintings, photographs, drawings and writing, cast on each other and the architectural fabric of Cooper Gallery. Shown over two floors of the gallery the exhibition is a rare chance to engage in Canoilas’ complex visual mediation of images. For more information about the exhibition please see the website. 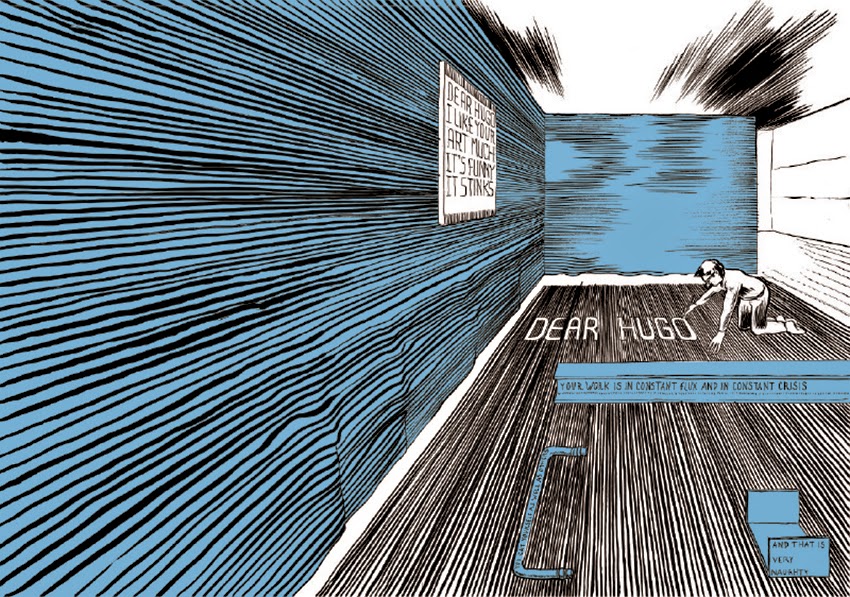 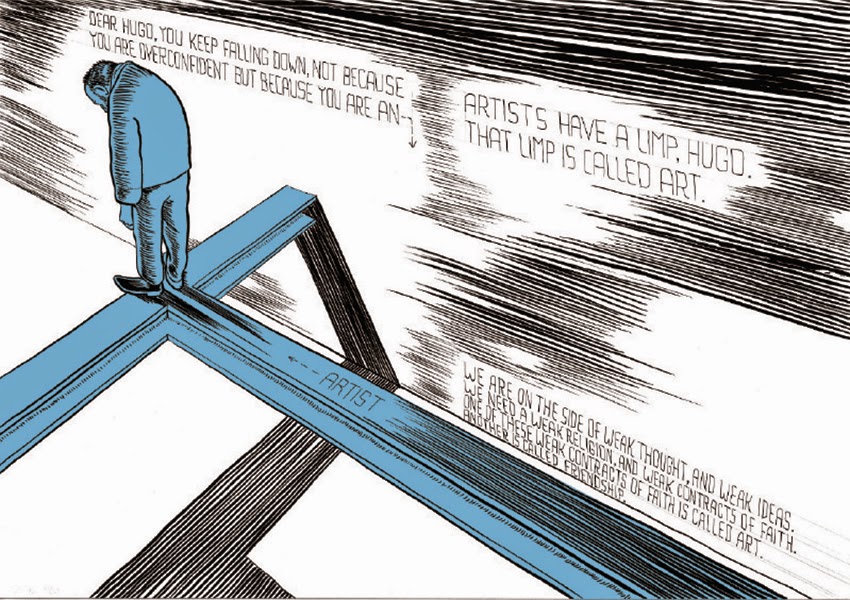 'I Like Your Art Much' is available to purchase from Cooper Gallery Publications website for £7.50 plus P&P.

Posted by ExhibitionDJCAD at 03:21 0 comments